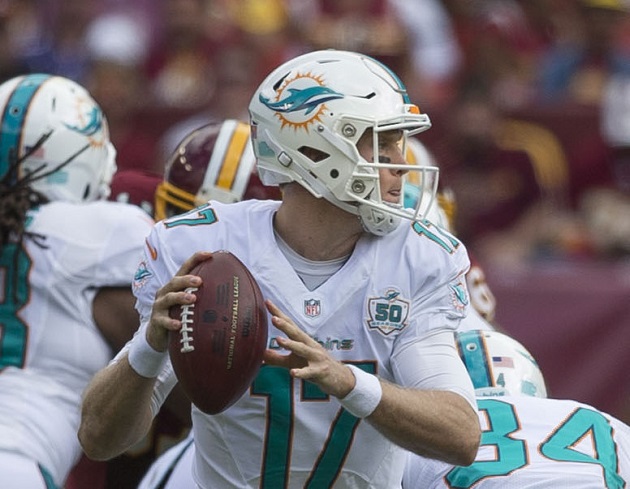 Training camp begins for the Miami Dolphins on Thursday, and there are questions swirling around their facility at Nova Southeastern University in Davie. Many around the country, including Vegas, are predicting that the Dolphins ​will be one of the NFL's worst teams in 2018.

The projections are not helped by the uncertainty around the return of starting quarterback Ryan Tannehill from injury. Miami's situation under center highlights our list of the five burning questions surrounding Dolphins ​Training Camp.

How does Tannehill bounce back from an ACL tear?

The last time we saw Tannehill on the field, he was helping Miami become a playoff contender in head coach Adam Gase's first year. After a season away due to his ACL injury, all the old questions have cropped up that have been a staple of the media circuit since he was selected with the eighth pick in the 2012 NFL Draft.

All signs indicate that Tannehill is completely healthy, but he will have to remain that way into the season to rebuild confidence. Tannehill also needs to continue to show the progress he did initially under Gase to make sure he's Miami's quarterback going forward.

Who slots next to Xavien Howard at cornerback?

Xavien Howard established himself as one of the Dolphins ​stars on defense in his second season last year. Miami has a wealth of players behind him at corner, but not one of them is a clear choice to man the other side of the field.

Some of the main contenders include Cordrea Tankersley, who started 11 games as a rookie in 2017, and Tony Lippett, who led the team in interceptions in 2016 before missing last year with an Achilles tear. Rookie Minkah Fitzpatrick will mostly play safety, but he has been practicing at multiple corner spots and may be called upon to help here in a pinch.

How does Miami replace Ndamukong Suh?

Out of all the players the Dolphins ​jettisoned out of town this offseason, none of their losses will be felt as much as Ndamukong Suh. His ability to stabilize the defensive line and provide interior pressure is an irreplaceable skill.

It appears like Miami will look to fill the spot by committee, with names like Jordan Phillips, Davon Godchaux, Vincent Taylor, and Akeem Spence all factoring in. While none of these players can individually match Suh's talent, they will be fresher rotating, and that can hopefully lead to them inching closer to the same level of productivity.

Can DeVante Parker step up to be a number-one wide receiver?

Jarvis Landry caught more passes than anyone in NFL history during his first four seasons. With Landry being traded to the Cleveland Browns, annual underachiever DeVante Parker is expected to make up for that loss of production.

Part of Parker's lack of consistent performance is related to injury problems, so there is some hope here. The coaching staff continues to rave about him as well, but fans will remain skeptical of this former first-round pick until he proves it on the field.

Who is the Dolphins third linebacker?

Kiko Alonso and Raekwon McMillan are locks to start at linebacker, but Miami is trying to figure out who will join them. The team most likely hopes that their third-round pick out of Ohio State, Jerome Baker, can fill that role, but only time will tell on whether he is ready for a primetime role.

If Baker falters in training camp, Stephone Anthony and Chase Allen are backup options for the team. This was a unit where the Dolphins ​really struggled last season, and they need great improvement for the team to outperform expectations.

Stay connected to sports in Miami by registering on 305area. You can follow contributor Carson Ingle, and your subscription is always free!